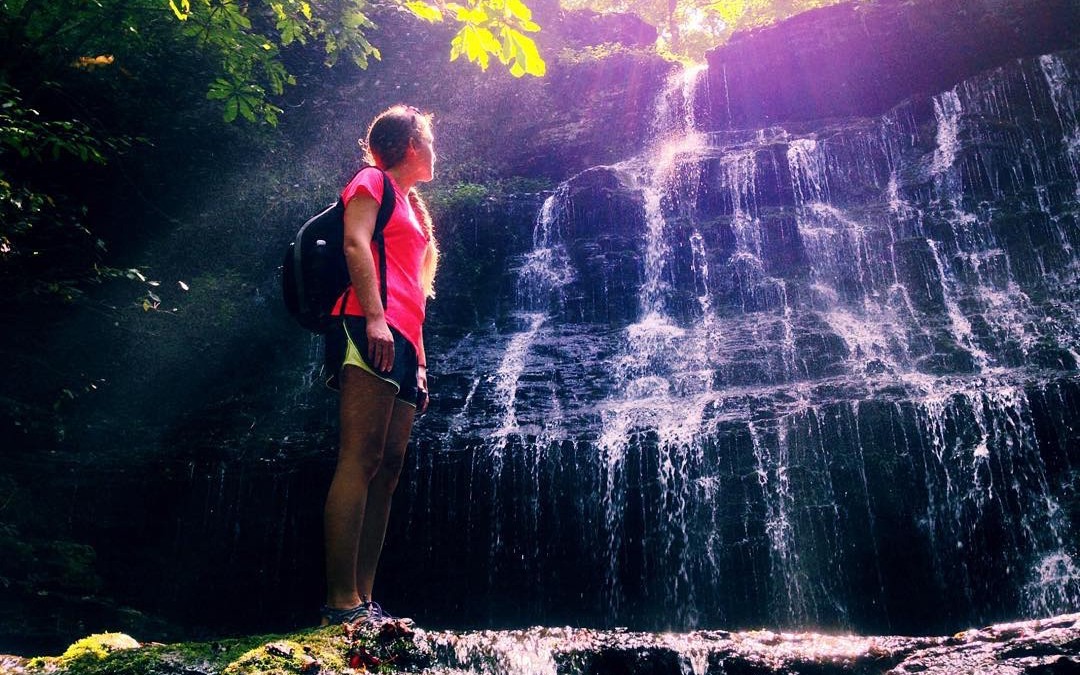 The sweat on her arms glistened in the brilliant light cascading over the waterfall. A full day of hiking to get there, but the sun was putting on a more impressive show, striping the pit she had entered with highlights of discovery and shadows of mystery.

She pulled a bottle of water from her pack, gulping it down in seconds. The falls looked even more refreshing, inviting her to rinse in its cool streams. Setting down her pack, she stepped up to it and let it pour over her hands and arms, closing her eyes and splashing water over her face.

She smiled and tilted her head up into the light. The cool drops evaporated in the warmth of the sun until a shadow blocked it out. When she opened her eyes, a figure was standing on the top ridge of the waterfall, silhouetted by the harsh light.

“You should not have come here,” the figure called out with a man’s voice.
“Okay,” she mocked.

The man leapt from the ridge and landed on his feet, cracking the slab of rock underneath her. He only wore a cloth draped around his waist and a necklace displaying sharp teeth unlike any she’d seen before.

“This is not a joke. You are dangerous. Leave!”

Not knowing how anyone could have survived such a jump, she was more than happy to oblige him. She grabbed her pack and began to run. But a low growl behind her made her too curious to keep going.

From underneath the falls, a large beast emerged and shook water from its massive wings and scales. It looked at the waterfall.

“Who has made my water impure?”

The beast craned its towering neck around to look at her and glared. She was so terrified, she hadn’t noticed that the man was gone until he grabbed her hand.

They started running as the creature shrieked and stomped after them, its massive claws making horrific scraping sounds on the rocks. They dove into an opening in the pit’s wall too small for the creature to enter.

“How do we kill something like that?” she could barely ask.
“Kill it? You cannot kill it,” he said with a grin.
“Then, what do we do?”
“You. You must purify your soul to purify its waters. It will never stop hunting you until you do. I will teach you.”

**Get the first volume of 100 Storygrams ebook completely free by clicking here!