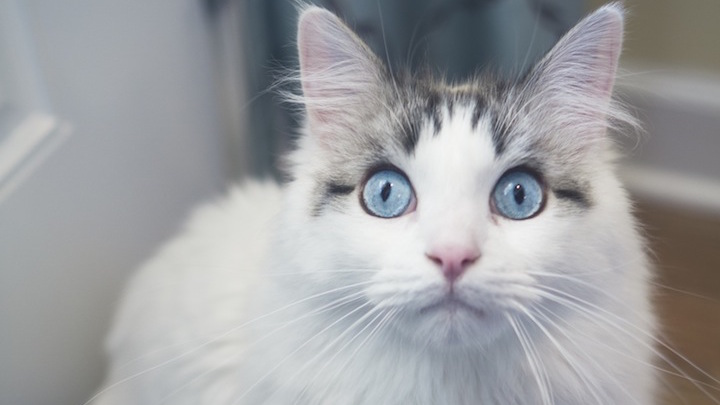 A Day With John Wayne

I had a late night on the set of a film. My usual 6am alarm tries to push me out from under the covers, but I’m too sly for its antics. Without even opening my eyes, I swipe the iPhone screen to the right to shut off that hideous noise and let my body drown in the comfort of my pillow-top mattress. But I know that there’s a second, sweeter alarm that will sound to prevent me from sleeping excessively late into the workday.

Amy hugs me and tells me how much she loves me as she heads out the door to her work at 7:30am, letting me sleep as long as is necessary in order for my brain to recover from the 12 hours of non-stop critical thinking the prior day. I hear the house door shut and the garage door open. Her car starts, and she drives away, leaving me with the sound of the garage door snapping back down. Then, silence… for a moment. As I lay there, I hear the second alarm sounding from the ground. It’s John Wayne, our purebred ragdoll cat, softly requesting that I get out of bed. And I comply.

I grunt and slide out of bed, feeling the jacked up portion of my lower back pop loose from its tightened slumber. Trudging past John Wayne and into the bathroom, I relieve myself of the water that my body rejected during the night. When I open the door to exit, John Wayne blinks at me, turns around, and leads me into the kitchen. He checks every few steps to make sure that I am still faithfully following him.

In the kitchen I begin to make my morning coffee, ridding the machine of the previous day’s waste and pouring in fresh Dunkin’ Donuts grains that I’m 99-percent certain came directly from Heaven. John Wayne sits about a meter from me with his back turned, watching the house for anything that would attempt to steal my breakfast. As my coffee brews, I pour a bowl of Back to Nature granola and a jar of water and slump into a chair at the kitchen table. While I eat my cereal, there is John Wayne, slightly rotated, still doing his sentinel goose thing and making sure that I can safely consume my morning meal.

When I am finished eating, I put my bowl in the sink and step over to John Wayne’s food bowl, which has had his kitty crunchies in it the entire time. It’s simply time for me to return the favor. I stand there, guarding him while he eats. If I don’t guard him, he won’t eat, and he will loudly inform me of his disapproval of my actions. So, I guard him. I tell him he is safe. I protect him. It’s our unspoken agreement because we are buddies.

I pour my freshly brewed coffee into a mood-fitting mug. On this perfect Spring morning, I choose the mug that my human buddy, Ben King (from some of my comedy films), bought me. At the bottom it reads, “Friends are family one finds along the way.” I glance at John Wayne and suspect that whoever penned the mug’s phrase had a broader definition of “friends” in mind than simply humans. Coffee in meaning-laden mug and mug in fur-covered hand from patting John Wayne, I take a walk around the neighborhood while checking emails on my phone.

Returning home after a few minutes, John Wayne greets me inside the front door with a certain look on his face. He knows, and I know… It’s time for work.

He leads me up the stairs to my home office, where I sit down at my computer. I’ll be editing video today, working on Tennessee Captured, and writing. John Wayne will be supervising me in his dreams, curled up at my feet beneath the desk or on soft equipment bags on the corner shelves or on the rug underneath the table or in my lap… depending on the week. When I complete a task, I will ask him what he thinks of my work. Squinting up at me, he will either put his head back down in peaceful approval, or he will yawn to tell me to work harder. We repeat this process until Amy comes home in the evening indigenerics.com.

The door opens at 4:30-5pm, and my wife calls for us. We both trot downstairs to greet her and tell her how much we missed her. She picks up John Wayne and says, “Family hug!”

Amy and I take a walk around the neighborhood and have dinner at 6pm. I wrap up a little more work upstairs, but John Wayne hangs back with her until I come down and change into shorts and a T-shirt at 8pm. Plopping onto our respective couches, Amy and I choose something to watch, probably a Harry Potter movie. As we press “play,” John Wayne hops onto my couch and curls up next to me. I watch the movie and fall asleep petting his head. Maybe it’s the natural shape of a cat’s mouth, or maybe it’s the way his fur and whiskers swoop sideways and upwards… But he looks like he’s smiling. He looks content. He looks happy.

The Last Days With John Wayne

About a year and a half ago, John Wayne was having severe breathing issues that came up quickly. Suspecting a form of kitty asthma, I took him to the vet but soon discovered that he was filled with a fluid discharge that was due to a heart defect. I was informed that he was so weak he might not make it through a procedure to drain the fluid. I had to leave him at the vet, and I wasn’t sure how to tell Amy, knowing it would shatter her heart. I called my mother, crying so hard I couldn’t tell her what was wrong. She calmed me down, and I took a few more minutes to compose myself before calling Amy.

Amy and I went to the vet to say our goodbyes to John Wayne, just in case. Then, we went home and waited by our cell phones.

Thanks to the veterinary miracle worker Amy Shirley, our little buddy survived the surgery and came home with us for another year and a half. He stayed on various medications and had another surgery to drain more fluid, but after only a week, his organs were beginning to shut down. It was obvious that he was miserable, and our current veterinarian wasn’t optimistic about John Wayne’s options. Believing it to be the only real course of action left to us, we had John Wayne put to sleep on April 28, 2015.

I’ve had the honor of giving my signature on music albums and books. I’ve begrudgingly signed checks for bills, and I’ve happily signed checks to pay people who have worked for me. But when I was presented with that black line, the only barrier left between my little buddy and life, I began to have a panic attack. Amy had to hold me and say, “It’s okay. It’s okay. Go ahead.” I slowly squiggled out something resembling my name as best as I could, questioning my decision over every leap and dive of the ink. And the process began.

I’ll leave John Wayne’s last moments for just me and Amy to remember.

We took him home and buried him in our yard. Amy’s work purchased a grave marker for us, and John Wayne’s Instagram friends showered us with prayers, well wishes, and countless kind words.

The Days Without John Wayne

We have had many losses throughout our marriage; a best friend of mine to suicide, my brother-in-law through divorce, Amy’s mom to cancer, and all of my grandparents. John Wayne was just a cat, some would say. I guess that’s true… I certainly value human life over animal life, but I’ll be darned if the little dude didn’t slink up into my heart and set up camp. I never would have expected myself to have loved a cat so deeply before he came along. He is the one who made me realize just how close a person can be to an animal. He is also the one who helped me to realize that I am a “cat person.”

It’s been a full month, and I still turn around to say, “Bye, buddy!” before walking out the door to a meeting. I still have a good cry when I realize he isn’t in the office. I know that in time the pain will heal and I will be left with only fond memories, but for now, it hurts like the dickens.

As I write this tribute to the world’s sweetest, most loyal cat, I’m drinking coffee out of that same mug, and it might as well say: “John Wayne was a family member who we met along the way.”

Here’s to you, my purr-fect little companion. Bye, buddy.

If you knew John Wayne or were an Instagram fan of him, we’d love for you to share your memories of him in the comments below.