Know the Rules : Break the Rules 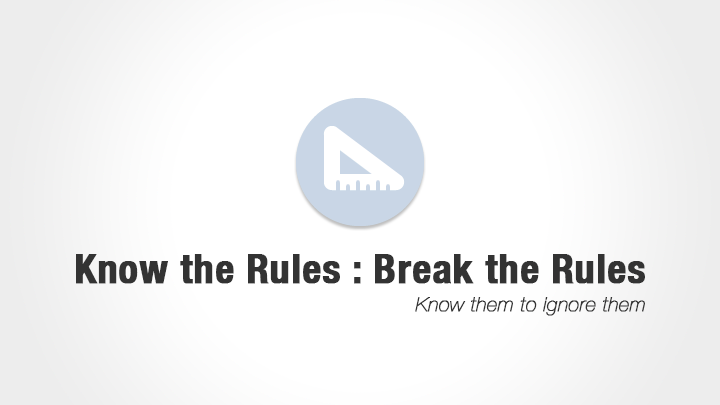 Know them to ignore them

Every artist can relate to the pain of having an educational institution dissect the often magical process of creating a work of art. They sift through the pieces and reorganize them into a set of patentable instructions that can be marketed and sold, necessitating a strong list of imperative “rules” to smother your every creative breath.

As they bid against each other for the next four years of your time and money, they cry:

“Break the rules, and you won’t be successful! And coming here is the only way to learn the rules!”

This is the pillow they use to suffocate any notion you might have of becoming self-made through perseverance.

And probably nothing has been more dissecting than writing.

Seriously, how perfect for our discussion is that line in Pirates of the Caribbean, spoken by Captain Barbossa?

Throughout my career in filmmaking, I’ve said countless times, “You have to know the rules before you can break them.” I’ve said it to filmmakers, photographers, writers, etc.

While I don’t think highly of many universities (I received my film education from the University of Google, Hard Work, and Practice), I do agree with them that learning suggested “rules” in your craft is the best way to form a foundation for your work, a solid ground, if you prefer.

And here, we get to the why of it all, which is something I strive to do. Why should you learn the rules, especially if all you’re going to do is ignore them?

I’ve met many new photographers, just learning to crawl with their work, and I’d say about 75% of them argue with me about the need for learning the “Triangle of Exposure” (i.e. Shutter, Aperture, ISO). They say, “Oh, well, I don’t care about all that stuff. I just like to focus on the art of it.”

Friends, the “rules,” as much as they suck to learn, are part of the art of it.

For instance, if you throw your camera into auto-everything mode and start snapping, you won’t know how to get it to create just the right depth of field, how to compensate for a fast or slow-moving subject, or how to keep the digital noise to a minimal. You’re leaving it all up to chance, which puts your creativity in the hands of a device. You are supposed to be the one telling it how you want the picture to look! And to be blunt, you’re also being lazy.

The “rules” in any art form can and will be broken, and they should be from time to time. But if you don’t know them, it is less likely you will know how you did something. If you really loved the something that you did, you won’t be able to do it again.

Repeatable artistic results separate the amateurs from the pros. The pros know what the rules are, they know why they broke them, and they know exactly how to make it happen again on a different project. Perhaps, this process is how we usher in the birthing pains of “style”?

If you’re a writer, knowing certain best practices of writing (like this gem from Stephen King) will not limit you but free you. Because when you break those rules, you will know why you broke them, and you will have more confidence in your writing decisions.

This self-confidence is what your creative freedom is hiding behind.

Be sure to subscribe to the Story Lovers Community below, because lots of free stuff is coming soon, including my new ebook “I, Storyteller,” but you have to be on the list to get it all!

So, what do you all think about the “rules”? Can you think of any that have actually helped you to understand your work better?